Electromagnetic (EM) radiation is a form of energy that is all around us and takes many forms, such as radio waves, microwaves, X-rays and gamma rays. Sunlight is also a form of EM energy, but visible light is only a small portion of the EM spectrum, which contains a broad range of electromagnetic wavelengths.

Electricity and magnetism were once thought to be separate forces. However, in 1873, Scottish physicist James Clerk Maxwell developed a unified theory of electromagnetism. The study of electromagnetism deals with how electrically charged particles interact with each other and with magnetic fields.

There are four main electromagnetic interactions:

1. The force of attraction or repulsion between electric charges is inversely proportional to the square of the distance between them.

2. Magnetic poles come in pairs that attract and repel each other, much as electric charges do.

3. An electric current in a wire produces a magnetic field whose direction depends on the direction of the current. 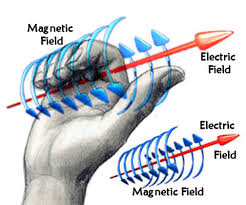