The aim of the course is to provide students with the methodological skills necessary for them to carry out independent research.

You will notice that each of the columns is labeled “var.” The column names will represent the variables that you enter in your dataset. You will also notice that each row is labeled with a number (“1,” “2,” and so on). The rows will represent cases that will be a part of your dataset. When you enter values for your data in the spreadsheet cells, each value will correspond to a specific variable (column) and a specific case (row). 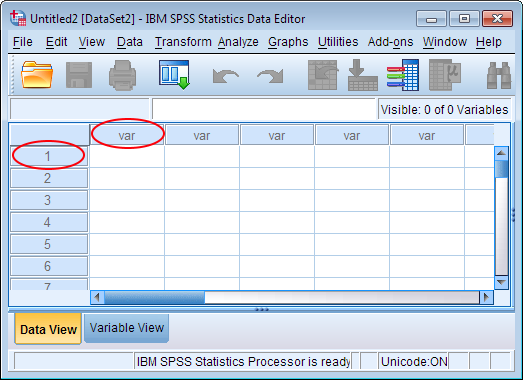 Sometimes you may need to add new cases or delete existing cases from your dataset. For example, perhaps you notice that one observation in your data was accidentally left out of the dataset. In that situation, you would refer to the original data collection materials and enter the missing case into the dataset (as well as the associated values for each variable in the dataset). Alternatively, you may realize that you have accidentally entered the same case in your dataset more than once and need to remove the extra case.

To insert a new case into a dataset:

To delete an existing case from a dataset:

Sometimes you may need to add new variables or delete existing variables from your dataset. For example, perhaps you are in the process of creating a new dataset and you must add many new variables to your growing dataset. Alternatively, perhaps you decide that some variables are not very useful to your study and you decide to delete them from the dataset. Or, similarly, perhaps you are creating a smaller dataset from a very large dataset in order to make the dataset more manageable for a research project that will only use a subset of the existing variables in the larger dataset.

To insert a new variable into a dataset:

All values for the newly created variable will be missing (indicated by a “.” in each cell in Data View, by default) since you have not yet entered any values. You can enter values for the new variable by clicking the cells in the column and typing the values associated with each case (row).

To delete an existing variable from a dataset:

Alternatively, you can delete a variable through the Variable View window:

Now that you know how to enter data, it is important to discuss a special type of variable called an ID variable. When data are collected, each piece of information is tied to a particular case. For example, perhaps you distributed a survey as part of your data collection, and each survey was labeled with a number (“1,” “2,” etc.). In this example, the survey numbers essentially represent ID numbers: numbers that help you identify which pieces of information go with which respondents in your sample. Without these ID numbers, you would have no way of tracking which information goes with which respondent, and it would be impossible to enter the data accurately into SPSS.

When you enter data into SPSS, you will need to make sure that you are entering values for each variable that correspond to the correct person or object in your sample. It might seem like a simple solution to use the conveniently labeled rows in SPSS as ID numbers; you could enter your first respondent’s information in the row that is already labeled “1,” the second respondent’s information in the row labeled “2,” etc. However, you should never rely on these pre-numbered rows for keeping track of the specific respondents in your sample. This is because the numbers for each row are visual guides only—they are not attached to specific lines of data, and thus cannot be used to identify specific cases in your data. If your data become rearranged (e.g., after sorting data), the row numbers will no longer be associated with the same case as when you first entered the data. Again, the row numbers in SPSS are not attached to specific lines of data and should not be used to identify certain cases. Instead, you should create a variable in your dataset that is used to identify each case—for example, a variable called StudentID.

Here is an example that illustrates why using the row numbers in SPSS as case identifiers is flawed:

Let’s say that you have entered values for each person for the School_Class variable. You relied on the row numbers in SPSS to correspond to your survey ID numbers. Thus, for survey #1, you entered the first respondent’s information in row 1, for survey #2 you entered the second person’s information in row 2, and so on. Now you have entered all of your data.

But suppose the data get rearranged in the spreadsheet view. A common way of rearranging data is by sorting—and you may very well need to do this as you explore and analyze your data. Sorting will rearrange the rows of data so that the values appear in ascending or descending order. If you right-click on any variable name, you can select “Sort Ascending” or “Sort Descending.” In the example below, the data are sorted in ascending order on the values for the variable School_Class. 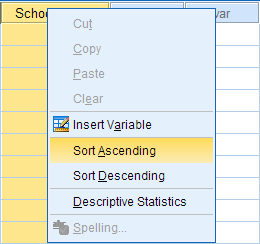 But what happens if you need to view a specific respondent’s information? Or perhaps you need to double-check your entry of the data by comparing the original survey to the values you entered in SPSS. Now that the data have been rearranged, there is no way to identify which row corresponds to which participant/survey number.

The main point is that you should not rely on the row numbers in SPSS since they are merely visual guides and not part of your data. Instead, you should create a specific variable that will serve as an ID for each case so that you can always identify certain cases in your data, no matter how much you rearrange the data. In the sample data file, the variable ids acts as the ID variable.